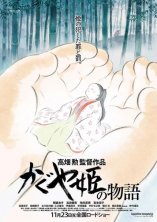 The Tale of the Princess Kaguya

Sinopsis:
"The Tale of The Princess Kaguya" is adapted from the 10th century Japanese folktale "The Tale of the Bamboo Cutter," widely known throughout Japan. It is the oldest extant Japanese narrative and an early example of proto-science fiction. The story details the life of a mysterious girl called Kaguya-hime, who was discovered as a baby inside the stalk of a glowing bamboo plant and is raised by a poor bamboo cutter and his wife. She is said to be from the Kingdom of the Moon and has been sent to Earth to serve punishment for some unspoken crime. Kaguya-hime grows rapidly from a small baby to a young woman of extraordinary beauty, and attracts the attention of five noble suitors and eventually the Emperor himself. She spurns their advances and sets them each an impossible task, promising to bestow her hand in marriage to the one who can fulfill his quest. Following this, Kaguya-hime retreats into a melancholy state, her eyes filling with tears every time she gazes on the full moon. Her adoptive parents worry greatly and question her, and she finally reveals that she is not of this world and must return to her people on the moon. When the celestial entourage comes to retrieve her, a robe of forgetfulness is placed on her shoulders and all of her sadness and compassion for the people of the Earth are forgotten.